After our epic 11 hour cycle into Pamplona, we decided to stay for a well-deserved rest day.

We spent most of our day off going from bar to bar at the nearby towns trying out various pronunciations of “wi-fi?” in our best Spanish accents and doing a typing-on-a-keyboard motion with our hands at the bar keepers, until eventually we found a bar that understood our request and we managed to get online (it’s pronounced “we fee” in Spanish, by the way).

Whilst the rest of the campsite was gearing up for the running of the bulls fiesta in 6 days, setting up marquees, beer tents and stages, we caught up with our chores (mostly washing our smelly pants), I made a cycle tramps flag for the tent out of an old red wine stained t-shirt and neckerchief from the wine battle, we made friends with the campsite cat and had a takeaway pizza in our tent.  We knew how to party in Pamplona. 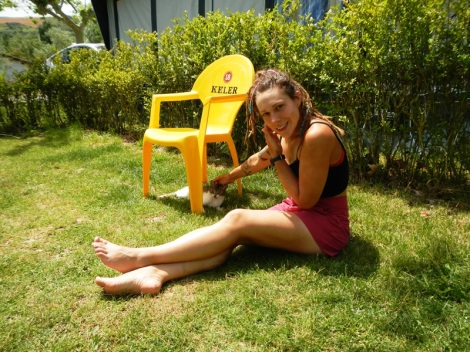 On our hunt for wifi, we annoyingly discovered the flat and scenic cycle trail through Pamplona that had eluded us the day before.  Grrrrr.

Well rested, we set off on our merry way to France the next morning to tackle our cycle over the Pyrenees.  For most of the journey, we were following the Camino de Santiago pilgrim route, which was full of hikers making their way in the opposite direction to us, mostly carrying sticks and sporting gruff beards and weathered looks, like they’d been walking non-stop for years.  Maybe they had.

We also saw more cyclists that day than we had on the whole trip so far.  We were overtaken quite a few times by racing bikes sprinting past. 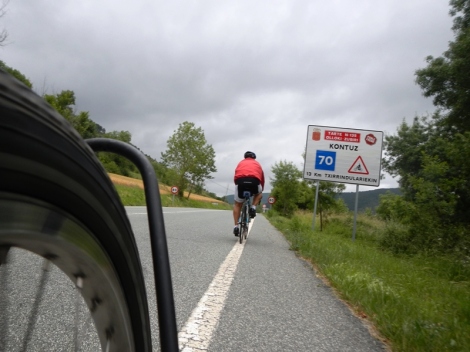 They were all very friendly, cheering us on and not mocking us (I think).  We were a bit surprised when, near the top of the first mountain, one lycra-clad racer let us know there was only 1km left to the descent.  We were both a bit confused; it felt like we’d only just started climbing.  Don’t get me wrong, it was tough going but it was nothing compared to the mountains we’d cycled in northern Spain!

At the top, there was a little van-cafe where we stopped for a drink.  They had a box on the floor for people to leave heavy clothes and unwanted items that was full of jeans and jumpers discarded by weary hikers.  As weighty as our bikes were, we weren’t at the point of ditching our belongings just yet. 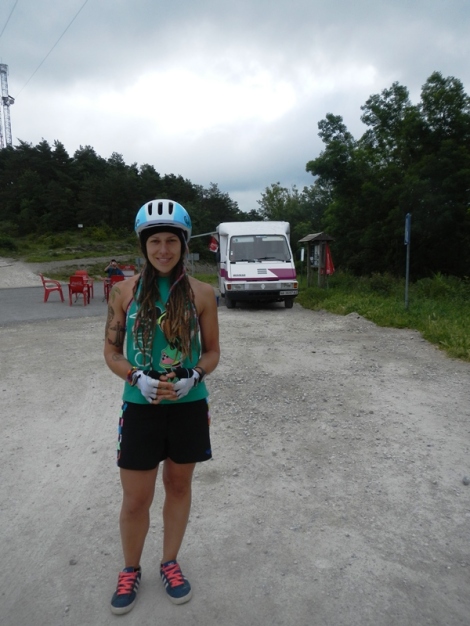 After a fairly brief decent we plodded onwards and upwards, making our way up another beautiful mountain.  At the top of mountain no 2, one of the pilgrims took our picture and gestured at us in German that we were doing a good job.  Well, that seemed to be the gist of what he was saying anyway.  We also had a slight mechanical glitch: a dodgy link in Nev’s chain that he spotted and fixed before it did any major damage. 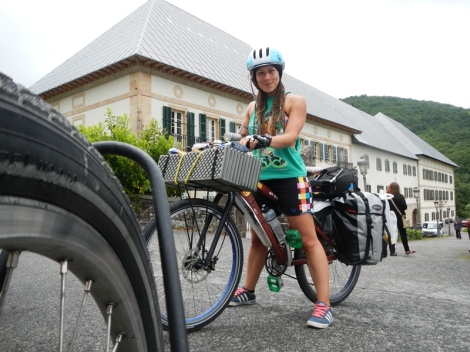 We stopped to eat our hearty lunch of bread and meat at the top of the third and final mountain of the day, which was a beast.

After that, joy of joys: a continuous decent for about 12 miles down the stunning, winding switch-back roads of the mountain.  Weeeeeeee. 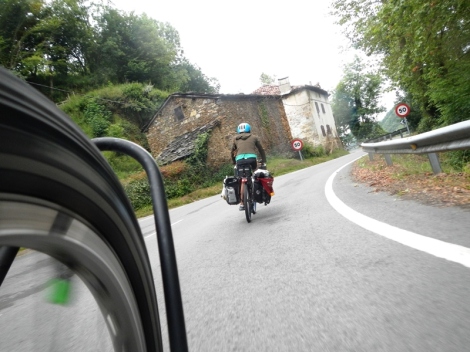 But, even better than that, the best reward yet for cycling 40-odd miles over the Pyrenees (and just seconds after crossing the French border): a sign that simply said “Fromage”.  I blinking love France.

We arrived at our first French campsite in the pretty little Basque town of Saint-Pied-a-Port at about 2 in the afternoon. 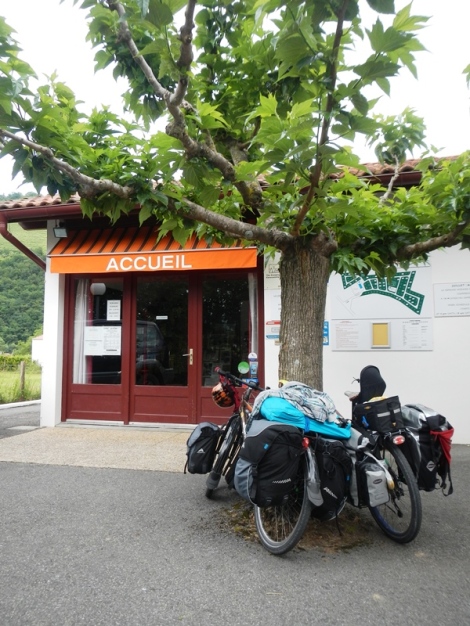 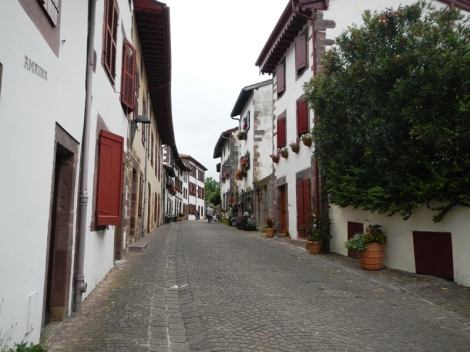 I babbled quite a lot to the woman on reception in a mixture of Spanish, French and English, but managed to get us a pitch for the night and even ordered a baguette for the morning.  We met a group of English guys (the first English people we’d come across for days) who had cycled from northern France and were making their way to the running of the bulls in Pamplona.  Nev helped one of them adjust his bike gears that had been playing up and we smugly warned them about the beastly mountains they faced the following day.

After a tasty crepe in the village for supper, we called it a night, ready to get on our bikes again in the morning.

One response to “One day, three mountains: Bonjour France!”