What a day this was: mechanical failure, getting lost A LOT, 40 degree heat and our longest ever day of cycling. It’s a long one but I’ll explain…

On Sunday evening in Logrono, we got an early night so we could set off early doors Monday to get some miles under our belt before the sun made its presence felt around midday. We’d planned a 62 mile route (there was a more direct 54 mile route, but that was more hilly), and figured we’d stop somewhere along the way for the night considering our longest distance so far was only 44 miles.

Waking up at 6:45 after a not-so-brilliant night’s sleep we packed away our things, got the bikes out and oh… a puncture on my rear tyre, brilliant. After changing the inner tube and spending longer than I should have trying to seat the tyre correctly we were on the road by 8am. We were both a bit tired and annoyed by the delay but the first 15 miles flew by on flat roads, averaging nearly 20 mph.

After those glorious flat 15 miles, this is where the next error occurred. We’d planned the route using Google maps and uploaded it to the GPS to follow, which so far has worked fine but we had not taken into account roads that had changed or been moved, which is exactly what we encountered. We stopped for a while to try and figure out where to go and after cycling through some bushes onto a dirt road, we continued on the un-mapped, un-signposted road to nowhere which appeared to be in vaguely the right direction. After a couple more stops and a fair bit of time cycling south and helplessly away from our target, we found the right road and continued in the direction of Pamplona.

We’ve spent a lot of time so far in Spain perplexed about why nobody is around or why nothing is open and today was no different. It was about 10:30 now and starting to get hot, neither of us had anything to eat and we were getting hungry. After passing through a few small towns that were completely empty we eventually arrived at a small town along our pre-planned route which we’d now re-joined. After finding out the town was sans-shop we found a bar, had some sandwiches, a rest and a cold drink.  I’m not sure how the landlady managed to interpret Neola’s Spanglish for ‘water’ to mean ‘Coca-Cola’, but that’s what we got, and we were glad for it.

Feeling much better, we rejoined our route only to find out about 5 minutes later it turned into a gravel track for the next 10 miles. After much cursing, we decided to turn the navigation off and figured out a route we could take by looking over the maps on the GPS. Once again we set out in the direction of somewhere that wasn’t Pamplona to link up to a road that we hoped would take us there.

Another few hours went by and by it started getting extremely hot. Having started to cycle south by mistake, we noticed the landscape changing from green vineyards to sandy coloured fields, often growing not much. In the distance we spotted the town of Lerin, which sits atop a cliff. 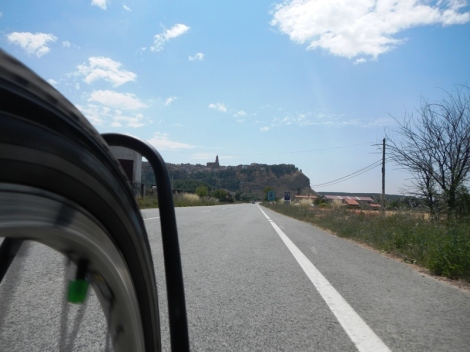 Despite saying as we cycled up to it “Good job we’re not going up there!”, we decided to go up there and stop for lunch. We found a shop that was open and got a hearty dinner of fruit, meat and bread and sat on the edge of the cliff under some trees. So far we had travelled 45 miles.

We set off again at about 2pm but it was now REALLY hot in the searing mid-day sun, peaking at 40 degrees. Even the slight breeze in the air was warm and I’m sure you could have made a cup of tea with our bottled water it was so hot.  Refreshing. To make matters worse, as we cycled the long up and down roads in the heat, we were both being slowly cocooned by spider webs floating across the road, perhaps they could smell all the flies that were being caught in my sweaty arm hair? Neola also seemed to be attracting bugs to her eyes like a moth to a flame.

A few more hours and killer hills passed but we were nearing our destination now, we were definitely getting there. I tried to programme the GPS for our campsite but after giving me the worst route ever (pictured below, only about 15 miles as the crow flies it said it was 150 miles) we continued to wing it by just going in the direction of Pamplona.

After climbing yet more hills and having covered 73 miles, we arrived in the town of Noain just south of Pamplona. Initially we were happy as this meant we can’t have been far away.  But, after further map-inspection, it appeared that the only way into the city was via motorway. It felt like getting into Pamplona was as difficult as getting into the Goblin City in Labyrinth.  We were pretty sure that little goblins were scrambling about, changing signs and roads before we reached them.

After even more cursing, we stopped on an industrial estate and ate our tea on a patch of grass, much to the confusion of the people who were passing by, leaving work and going about their business. I should have gotten a picture really of us sat in that industrial estate cooking up a pan of chorizo, and in hindsight it was pretty funny but neither of us found it particularly funny at the time.  As we sat there, frustrated, we debated cycling on the motorway (again) and even debated doing some proper tramping and sleeping in the derelict buildings and subway tunnels we’d passed through earlier.

But, after finding a route that back-tracked where we’d been for a few miles followed by a bit of a loop round, we decided to take that safer option, but we were still 14 miles away from our campsite for the night and it was nearly 7pm. We finally managed to penetrate Pamplona, which was very, very busy.

After the elation of finally getting into the seemingly impenetrable Pamplona, it was pretty demoralising that we then ended up coming straight back out of the other side of it, discovering our campsite wasn’t even in Pamplona but 5 miles to the north of it. After some more cursing and some more hills we eventually made it, 87 miles and 11 hours of cycling down, thoroughly knackered.

We set up the tent, had a cup of tea and some animal biscuits and were laid outside under the stars reflecting on (laughing at) the adventures of the epic day of cycling we’d just done when the phone rang. It was my friend Jon who works in Radio and asked if we could do an interview with BBC Radio Lancashire in about an hour about our trip! Both slightly delirious from all the cycling and sunshine, it was a perfectly bizarre end to a perfectly bizarre, demoralising but ultimately triumphant day. 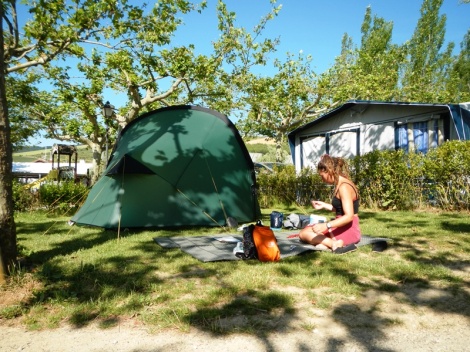