Since getting the train out of Croatia and spending a couple of days off in Budapest, we were more than ready to get our chaffed asses back in the saddle to make our way towards Bratislava.

Cycling through an eerily quiet Budapest in the early morning was a great way to say farewell to our favourite city (favourite so far, anyway). 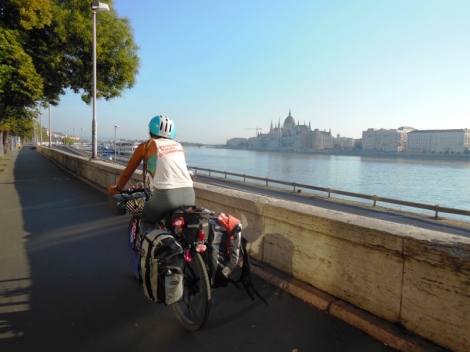 We planned to follow the Danube cycle trail that supposedly runs all the way to Vienna, but once we got out of Budapest, the trial spectacularly failed to live up to our expectations.  From reading about it online, I’d pictured a flat and pleasant tarmacked cycle path right by the side of the river, busy with cyclists with little cycle cafes dotted along the route. 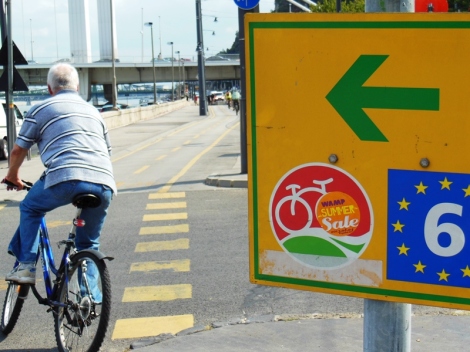 It was, in fact, really bumpy, away from the river and not well signposted, but it was pretty eventful: there was a funny moment when we almost followed the trail into the river… 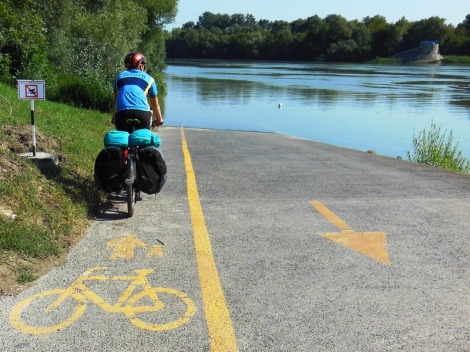 …and another when we ended up mountain biking through some pretty gnarly woods. 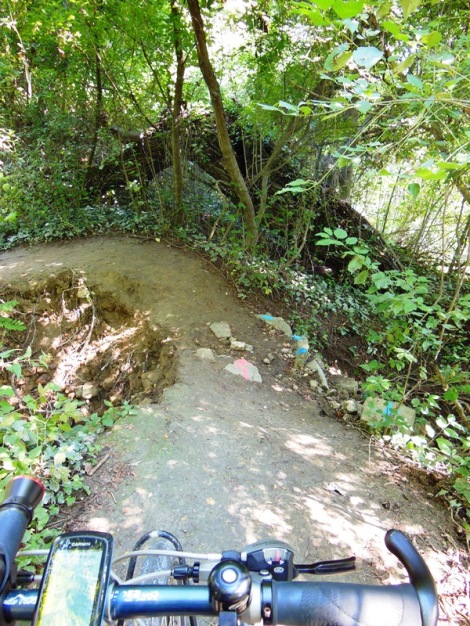 Not ideal with fully loaded bikes! But, to be fair to the Danube cycle trail, I think at this point we’d lost the official route and were just inanely following a series of pink spray painted arrows on the ground.

We even got two boats (well, they were actually platforms pulled along by tug boats) to cross the river.  BARP! BARP!

Unfortunately, when cycling, it’s difficult to avoid seeing (and sometimes cycling over) road kill at the side of the road.  Mmmm squishy.  On our trip so far we’ve seen A LOT of road kill, including many, many bloated frogs, hedgehogs, birdies, cats, weasels, snakes, rats, rabbits, bushy tailed (but no longer bright eyed) foxes and one dog (which was definitely the grossest), but the strangest road kill we’ve seen by far has to be this.

Stopping only for a quick Bumm on the way… 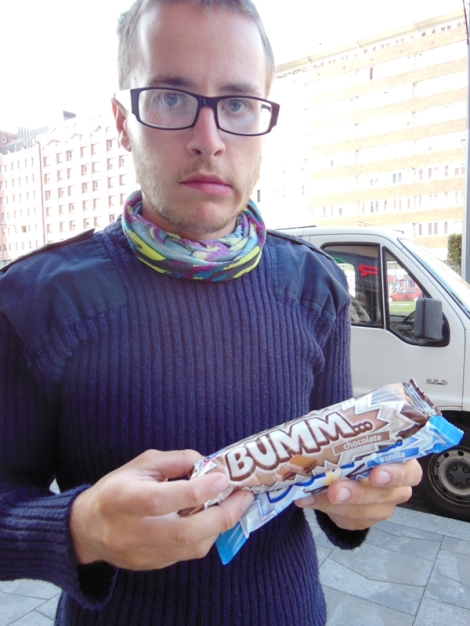 …we arrived after about 7 hours and only 65 miles in the town of Esztergom.  We’d planned on going further but the Danube trial was getting to be hard work and REALLY slow going with an average speed of only 8mph. Plus, Esztergom looked pretty impressive, with a massive imposing basilica on the hill, so we set up at the (totally deserted) campsite and cycled back to the town for a pizza (what else?) and a look around, sitting on the walls of the basilica to enjoy the view of the town and Danube below. 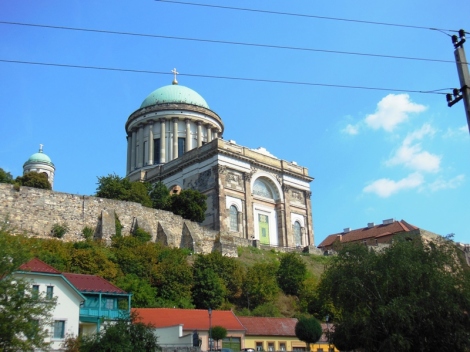 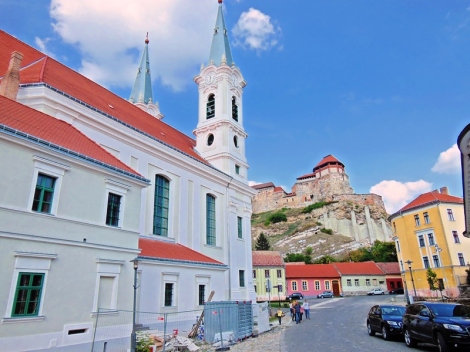 The next morning we cycled across the bridge that crosses the border with Slovakia.

We were still following the Danube trail which now varied between tarmacked roads and annoying gravel tracks through woods and farmland.

At one point, we came across a tree blocking our path with thick forest behind it, although I’m not sure that bit was part of the route.

As well as the fact that things have been starting get a bit cooler in the last couple of weeks (with our GPS reading temperatures in the 30s rather than 40s), we’ve also started to see the season changing around us.  Passing through agricultural land, the once happy sunflowers standing tall and proudly facing into the sun are now brown, crusty and looking depressingly at the floor. 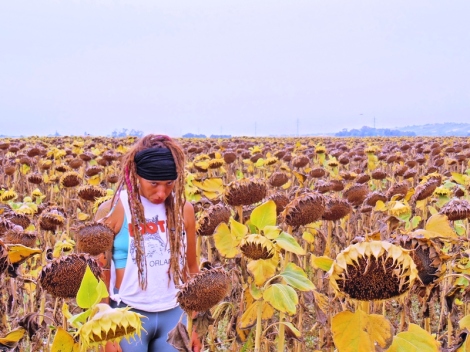 The produce growing in the fields is also starting to look a bit more autumnal.

I really don’t want the summer to end so every sad sunflower field we pass is a gentle reminder that the end is nigh 😥  On the plus side, we have seen quite a few cool faces made from hay bales, that never fail to cheer me up. 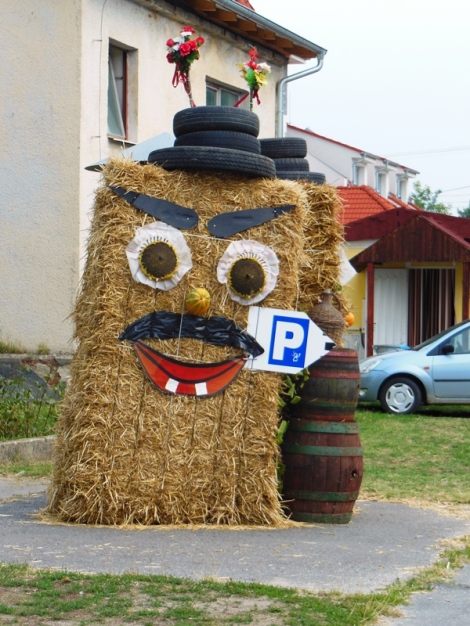 After getting annoyed with the quality of the cycle path…

…we eventually took to the roads and stopped to take a picture of this “no horse and carts” sign, which we thought was funny at the time.

But what was NOT funny was the next sign… 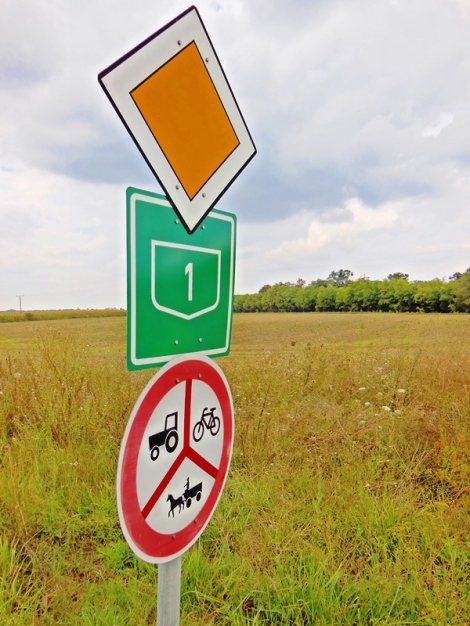 Back on the cycle path, we had to stop a couple of times for level crossings…

… and saw quite a lot of men on bicycles with a bucket filled with berries on each handle bar!

That afternoon, we hit 2000 miles on the odometer and at this point we’d crossed back over the border into Hungary so we celebrated with a bottle of (warm) Hungarian sparkling wine and a strange Hungarian desert next to a cornfield by the side of the road.  Rock and roll!

After almost 7 hours of cycling and another 65 miles down, we arrived at our campsite, just outside of Gyor in Hungary. 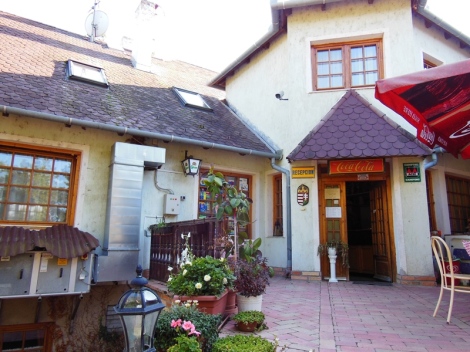 The next day, after stopping for a coffee in the super clean and posh looking town of Gyor, we headed towards Bratislava.

The Eurovelo route actually started getting better at this point – the roads were mostly smooth and tarmacked tracks through rural land, passing through tiny villages on the way. 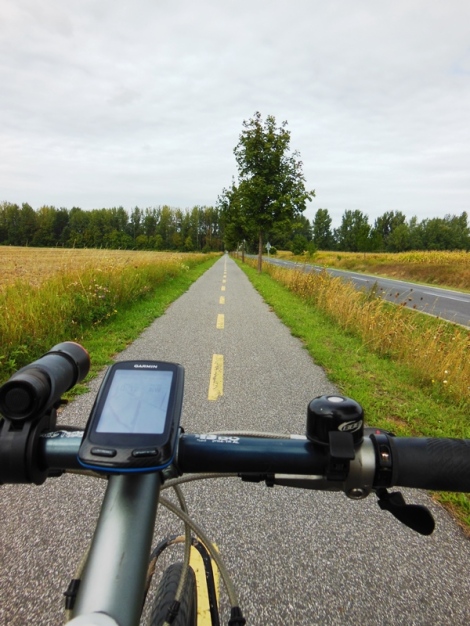 We stopped at one village for what turned out to be the greatest coffee ever – it took a laborious 8 minutes to make and cost less than £1.50 for two!  Yum. 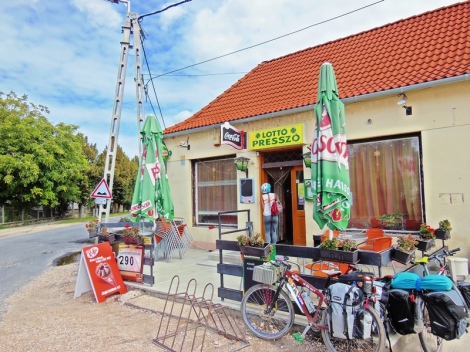 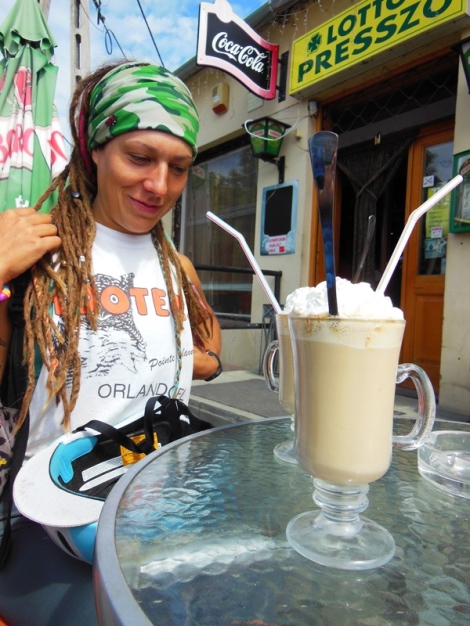 We then passed through what I think was the Bratislavan burbs and when we stopped at a shop for some kind of soothing throat sweet (I had a really sore throat at this point), a new friend came bounding up to me and his enthusiasm was just what I needed at that moment.  I’d been feeling a bit rough with a cold and tired after about 6 hours on the bike, cycling on flat roads but into a MASSIVE headwind! 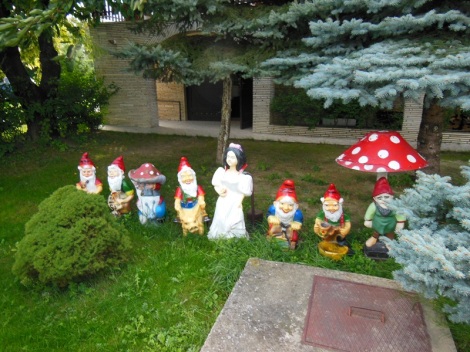 We arrived in Bratislava in the afternoon and managed to find our Wild Elephants Hostel hidden away on one of the cobbled streets, ready for a well-deserved day off…

4 responses to “Road kill, sad sunflowers and the 2000 mile club: Budapest to Bratislava”