We woke in the early hours of Tuesday morning to loud cracks of thunder and the clatter of heavy rain pelting off the canvas of the tent, which doesn’t bode well for a day in the saddle. After our usual 7am wakeup call had come and gone with rain still pouring down, we decided to stay put for the day and hide from the rain.

A little bit after 9am though the rain had stopped and with a quick change of heart we packed up our house and set off, just in time for the rain to start up again and get us nice and wet.

The route for the day took us further south through Italy, over the Slovenian border, straight through Slovenia and into Croatia, 48 miles in total. It should have been a fairly easy day despite the constant climbing and descending but the rain and wind was determined to make it tough. We made it to the border with Slovenia and ducked out of the rain and wind for a coffee.

We wasted a bit of time, listening to the howl of the wind outside and set off on our way again with the wind so strong and swirling around it was hard to stay up-right.  It’s hard to capture wind on film but you may be able to see Neola’s jacket and right pannier both flapping away in the wind. 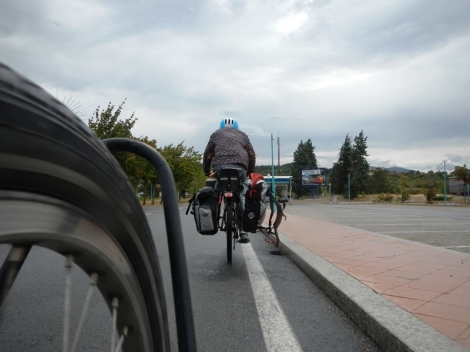 We never planned to visit Slovenia, only travel through it so we had no idea what to expect when we were there. The first thing we noticed was the amount of spit roasting meat along the road side. Every 10 minutes or so we would pass a slowly rotating pig over a coal pit. Mmmmm.

The second thing that was obvious was that nearly every car was foreign: Italian, German or Croatian. The road we were on was clearly a through route for tourists to Croatia from Italy and that might explain the amount of restaurants and not a lot else lining the road. It made us feel a bit sorry for Slovenia as it’s probably a really nice country but nobody gives it a chance. Poor Slovenia.

The other things we found were lorries that still drove far too fast and close and signs for exploding school children.

With the rain and wind calmed down we stopped at one of the many roadside restaurants for a well-deserved lunch. Turns out the chef had won some kind of pizza award so it would have been rude to not have a giant pizza for lunch, wouldn’t it?

They were as good as the certificate promised and after much discussion, better than any of the pizzas we’d had in Italy but not as good as the 4th best pizza in the world we’d had in France. Either way, we were both completely stuffed and mustering the motivation to get back on our bikes after lunch took some effort.

Shortly after lunch we stopped at one of the many currency conversion huts that swapped Euros to Kuna, Croatia’s currency. The exchange rate wasn’t very good but it did give us the chance to stop and talk to the only other cyclist we’d seen all day, a German man who was cycling roughly the route of the Eurovelo 8 and roughly the same route as us but much faster. He’d set off just 3 weeks previously and was already entering Croatia, although I don’t think he’d done much else but cycle and had taken a much more direct route. His bike was a mountain bike like ours so it can’t have been easy going, lots of respect for that! 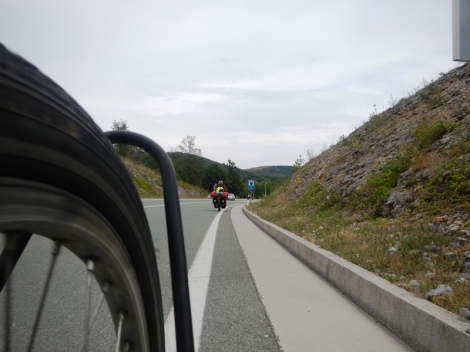 Another hour or so of burning off the several thousand calories of pizza we’d just eaten we were at the Croatian border and unlike all the other borders we’d crossed this one had guards and lots of police. Even so, they just waved us past and looked to be only checking 1 in 10 passports, nice and secure. 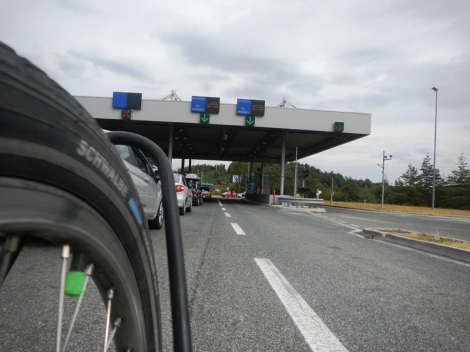 And with that, we were in the unknown land of Croatia. What we did figure out is that Croatian drivers are more mental than Italian ones and the roads are just as poor. 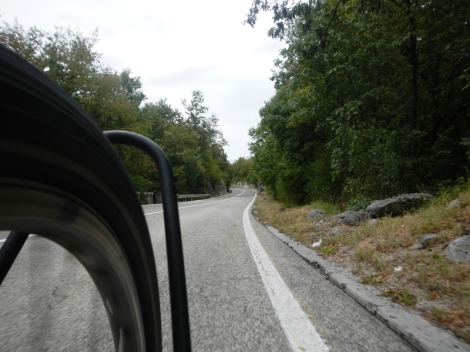 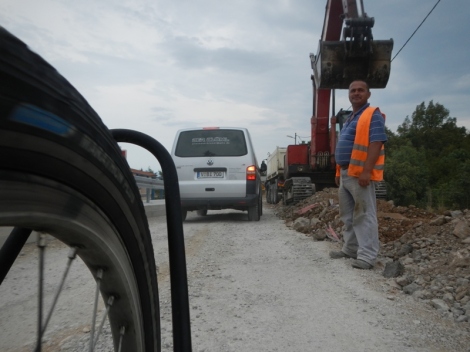 We negotiated the roadworks and a 117% hill (although I think the sign may have been altered) before ending up at the edge of a very dark Adriatic sea somewhere near our campsite. 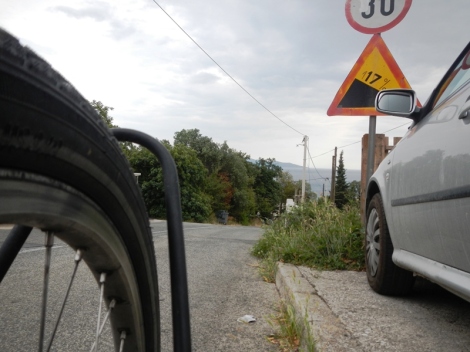 I say somewhere, because we could see what looked like the remnants of a campsite on one side of the road with a diving centre on the other side, with no signage for a campsite anywhere. Confused we went to ask at the dive centre and stumbled on AutoKamp Preluk! We checked in at the 24 hour, yes, 24 hour reception (we quizzed the receptionist on this, she sighed and confirmed the sign on the door was correct) and set up our tent on some more extremely hard but not quite rocks-instead of-tent-pegs ground.

When we arrived at the campsite, another couple had arrived before us and were setting up in the neighbouring pitch. By the time we had set up, figured out where the nearest shop was and got on our bikes, we noticed they were still setting their tent up. After a bit of observation, they were carefully cleaning the underneath of their tent with a foam tanning mitten, despite looking brand new in the first place and individually cleaning each tent peg before putting it in the ground. We labelled them ‘OCD go camping’ and left for supplies.  They looked none too impressed later in the evening when they saw Neola cleaning our pans in the sink with no washing up liquid and using her fingers instead of a sponge. OCD outrage.

The local town was lovely, a tiny and very Italian feeling harbour town with a big church at its centre. We resolved to visit properly the next day and have a good look round.

The rest of the evening was quiet with a light tea of fruit, yoghurt and teddy bear cake after the giant lunch pizza. I lubricated my rear brakes whilst Neola wrote a blog post and later we went for a moonlight walk on the beach, wondering what Croatia would have in store for us.