Our previous evening in Venice had really made us want to go back, so for our next day off we’d decided to spend it there. After the now routine day off chore of clothes washing we boarded another packed bus from our campsite to the bus station at the north of the island.

Our plan for the day was to board the boat bus to San Marco square, which is one of the main sights, and then meander our way back on foot throughout the day via a few more landmarks. The evening before we were surprised at how quiet the city was but our bubble was well and truly burst when we found the stop for the boat bus. 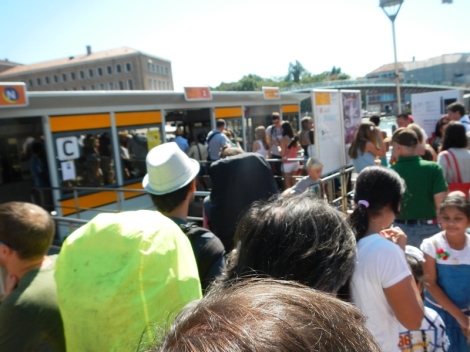 It was less of a boat bus and more of a boat crush, or something to that effect, because it was totally packed. We jumped off on one of the southern islands to escape the melee and have a look around. The islands off the main land were more like we’d seen the evening before- a few tourists but pretty calm with plenty of locals going about their business. It was lovely, so we had a breakfast of biscuits and iced tea by the water before hopping back on the boat bus to another island.

The next island had a big church with a statue of an armless woman beside it. I could never be a travel writer as I can’t remember either the name of the church or the name of the artist behind the statue, but a picture says a thousand words doesn’t it?

Jumping back on the boat bus, it was only one stop to the square where we’d initially intended to start our day but as we moored up we could see nothing of the square. Just people, people everywhere!

The square was indeed very pretty but we decided to not stick around with the hordes and headed into the labyrinth of streets.

A lot of what we do on our days off consists of wandering around for long periods of time, stretching our budget as far as we can. Luckily, Venice is very good for this as everywhere you go there’s something interesting to look at or tasty to eat. This morning’s treat was gelato. Mmmmm. 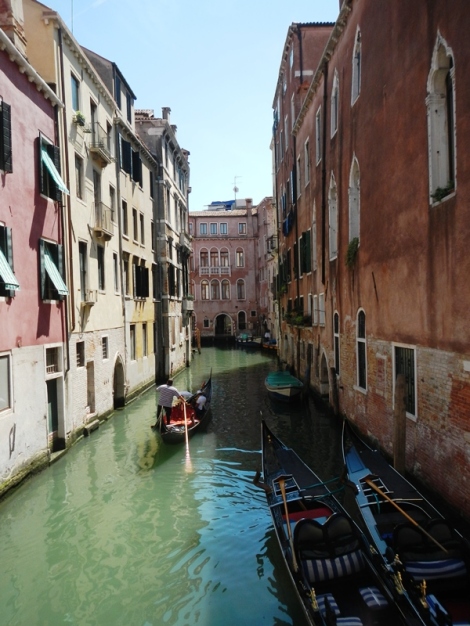 Another of the main sights in Venice is the big bridge over the Grand Canal that snakes through the centre, also known as Rialto. Unsurprisingly, this was also totally rammed with tourists posing for or taking pictures.

If Venice’s little canals are like roads then the Grand Canal is the ring road and it was just as busy as you’d imagine. They even had police boats liveried up the same as the cars! 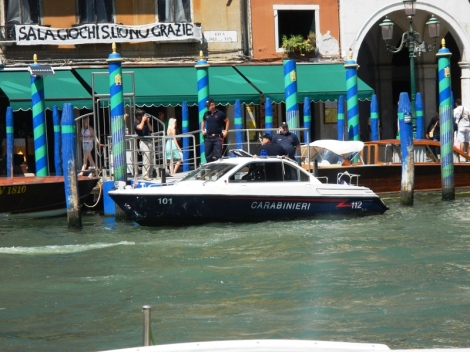 Once again we ran away from the crowds that engulfed the main sights, this time we found a giant marshmallow and some quiet streets to walk round. 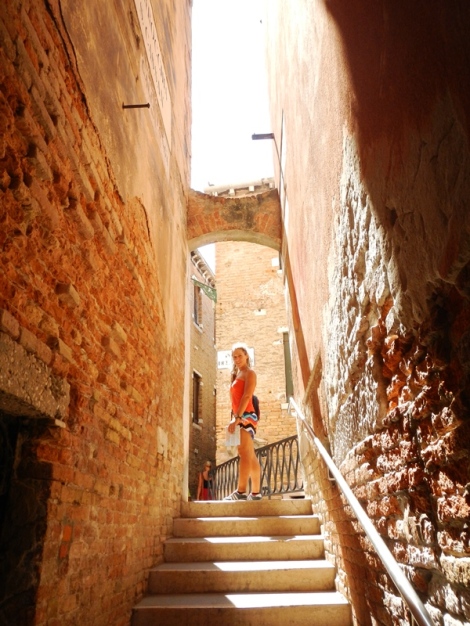 Now well into the window of lunch time, we set about seeking a cheap dinner to fill our bellies. We’d seen a few people walking around with pizza boxes but as yet hadn’t seen a take away. A little bit of searching later we stumbled upon PIZZA 2000. PIZZA 2000 is just as cheap as it sounds, and for just 10 Euros we ordered a ‘Family size’ Wurstel pizza, to the amusement of the lady taking our money.

As the chef started to prepare our pizza we figured out why she was amused, it was fricking HUGE and 10 minutes later he was removing our steaming hot fresh pizza from the oven when…

Yep, face down on the floor. It was impossible not to laugh! 15 minutes later he was a little more careful and we had a giant pizza for dinner. We even managed to find a quiet canal-side spot to eat and ruin the romantic moment of a couple next to us with the frantic sound of chomping.

Pizza demolished and ever so slightly more rotund, we carried on our wandering away from the crowds. Earlier on in the day we had run (briskly walked) away from a man selling roses but at a charity shop on some shady back street, Neola found a flower that fit her perfectly and just so happened to be made of bottle tops. 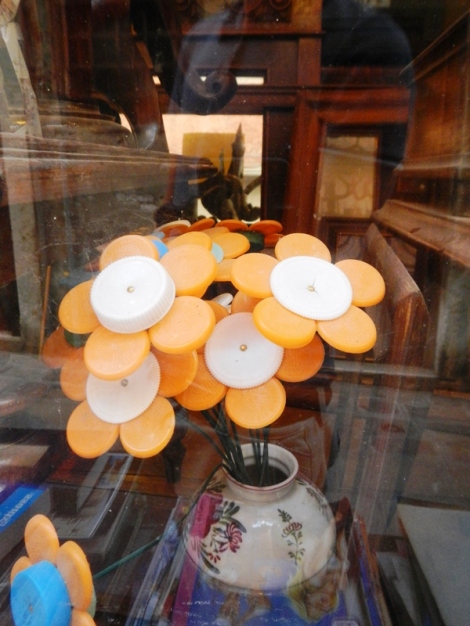 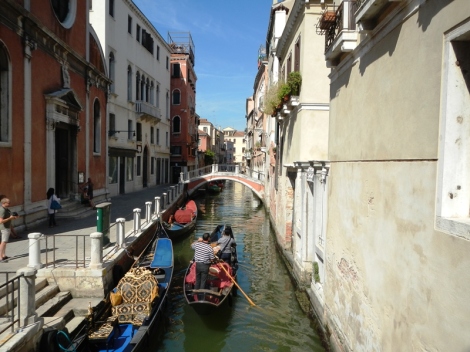 As we walked back towards the north of the town where we’d arrived in the morning, it was clear that it hadn’t quietened down at all throughout the day and was just as busy. We managed to find an elusive Italy sticker for our bikes and jumped back on the packed bus to our camp site for an early night ready for the 80+ mile day tomorrow.

3 responses to “From Venice with love and big sausage pizza”