Our trip so far has felt at times (to me anyway) like we haven’t been making enough progress but when we rocked up to Pavia, just south of Milan, two days before Neola was due to depart back to England on bridesmaid duties, we were pretty much on schedule. It was always the plan for Neola to get the night train back from Italy to Paris from Milan so we were very much on schedule.

Our stay in Pavia started on the wrong foot on two counts. We had been taking pictures underwater with the Nikon Coolpix AW100 camera we’ve been using so far to document our journey and despite being waterproof up to 10 meters, water managed to find its way in, it fogged up and conked out. Balls. Luckily, several hours in searing Italian heat was enough to dry it out and it miraculously came to life the next day.

The second count, whilst looking for things to do in Pavia the next day, Neola’s laptop stopped charging up. We put this down to a now lifeless charger and devoted the remaining battery power to finding a shop online that might sell a replacement in Pavia.

Camping Ticino is pretty close to the centre of Pavia, only a 20 minute walk along the river Ticino, including time to play on a big climbing frame. 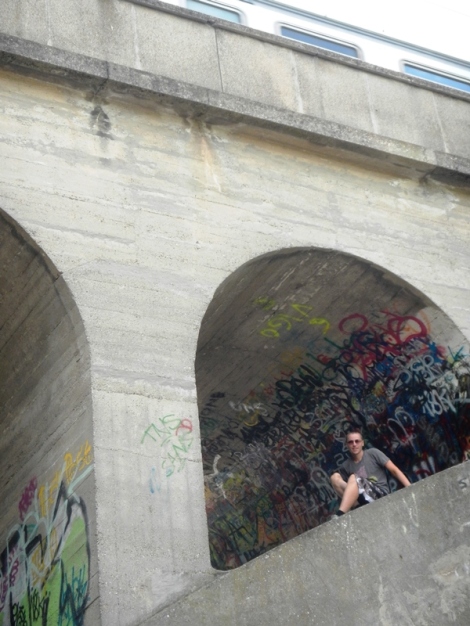 We started our day off by visiting the only computer shop we could find online the night before. The shop looked perfect and would certainly stock the charger we needed, had it not been for the paper sign in the window explaining they were closed for the summer. We have since found out that it’s common practice in Italy for shops to close randomly for holidays with only a hand written sign explaining it. Balls.

Abandoning the computer situation, we went for a stroll around the centre of Pavia, which was just as beautiful as many of the other Italian towns we’ve visited. Typical Italian cobbled streets with old buildings, most of which look past their best with the odd giant church thrown in for good measure. 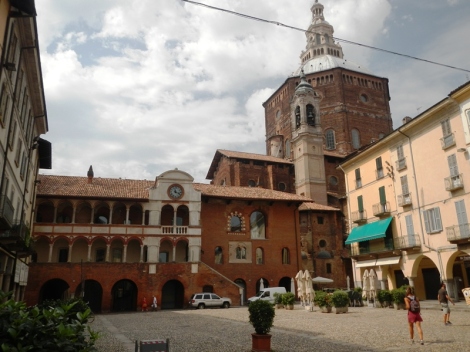 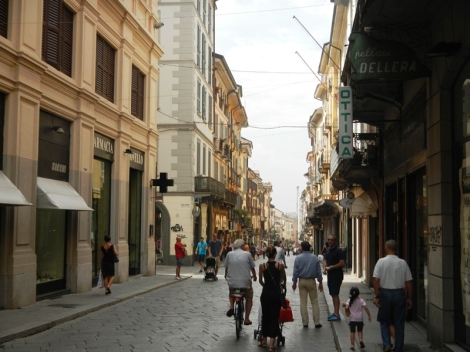 In one of the many squares and piazzas in Pavia was a large market, selling everything from sausages to VHS tapes and parachute pants (can’t touch this). It was chaotic to say the least and we even heard a woman exclaim “Ma-ma-mia!” 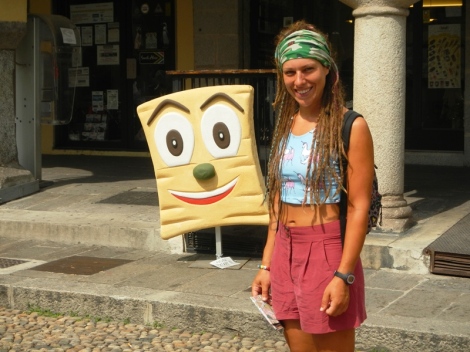 Another thing that Italians love (besides churches, shrines, god, Jesus, driving like maniacs and pizza) is a good statue. Often it’s of a 20 foot Jesus or just a plain old naked lady, but in the square opposite the big church I forgot the name of there was an anatomically correct horse and rider, which some kind yoof took the time to kindly point out with yellow spray paint. 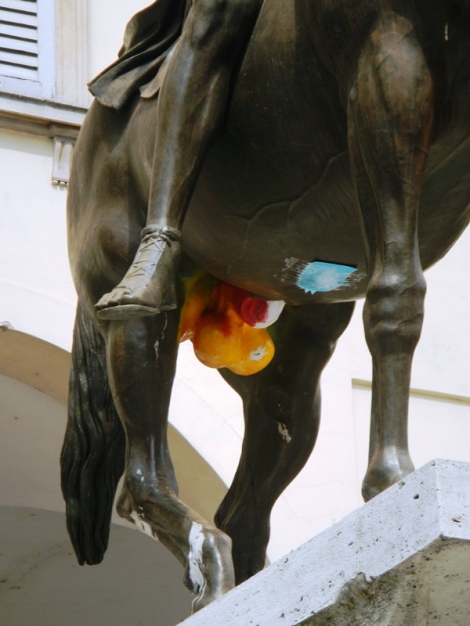 Just around the corner from the statue with the yellow member was Pavia’s university campus, with the grounds open to the public. Not a bad place to come and learn, really.

Refreshed by a lunch of freshly made pizza slices from a bakery, we went back to hunting for a computer shop.

After a bit of asking around we managed to find the other computer shop in Pavia. Luckily, they had what we needed and we blew most of our day’s budget buying another charger. Bad news was that the charger took the battery out with it, meaning that for the rest of our trip we’ll have to find a plug before writing up our blog posts. Balls.

Annoyed, we drowned our sorrows in coffee and beer at a bar near the campsite. The ceiling tiles cheered us both up though.

We were further consoled later that evening by even more pizza, again. When pizza is only 6 euros, it’s hard to eat anything else.

The next day was to be our last as a cycletramping unit as Neola left for England in the evening and we spent it in the fashion capital of the world, Milan. Neola dressed up for the occasion in her newly acquired parachute pants with double backpack and raincoat combo.

A brief train and tube ride brought us into the centre of Milan. Whilst the tube was slightly more straight forward, both train and bus tickets are completely inexplicable, I am pretty sure you could go anywhere without a ticket. 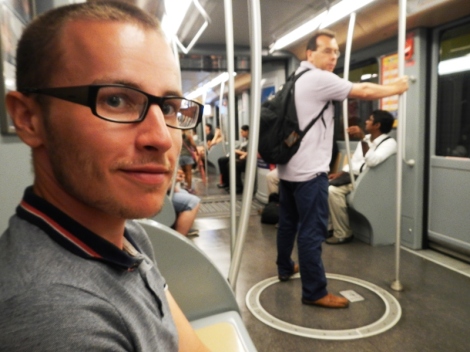 Neola’s raincoat was a wise choice as when we emerged from the tube it was pouring with rain, but this didn’t stop the hundreds of tourists flooding every available area. First stop was to check out the Duomo, with its hundred-and-something spires, it took nearly 500 years to complete. I wonder how the people who built it would feel about the giant Samsung TV advertisement on the side of it? 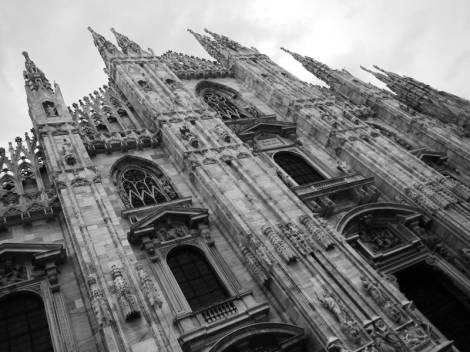 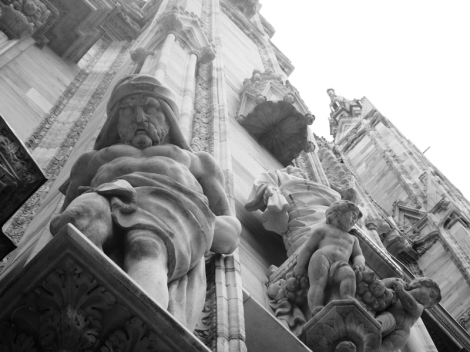 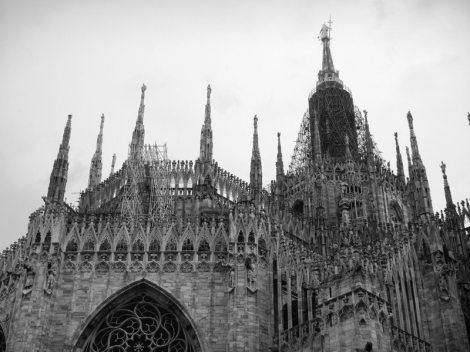 After a brief Panini stop, we got out of the rain and back on the tube to go look at another church. There really isn’t a lot else to do in Milan apart from shop (lots of those), look at churches (loads of those) and go to really expensive museums to look at religious paintings and statues which neither me or Neola were that keen on.

Which didn’t leave us a lot to do other than walk around and ride the underground. We made an accidental detour out of Milan to a supermarket for snacks and then back via some tat-shops in search of an Italy sticker. We didn’t find any stickers but did find a genuine Morg Samson toy. 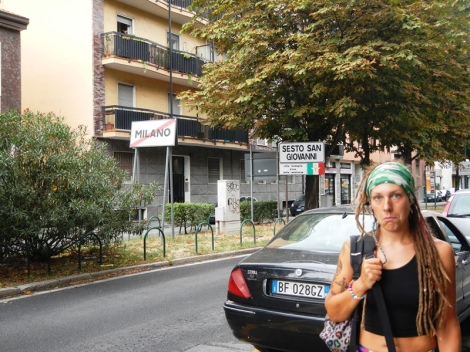 After a slightly confusing but very cheap tea at a self-service restaurant, we said our goodbyes and I headed back to Pavia and left Neola to wait for her train.

I spent the next 4 days drinking coffee, fixing bikes, finding places to read that didn’t have mosquitos and waiting for Neola to come back. 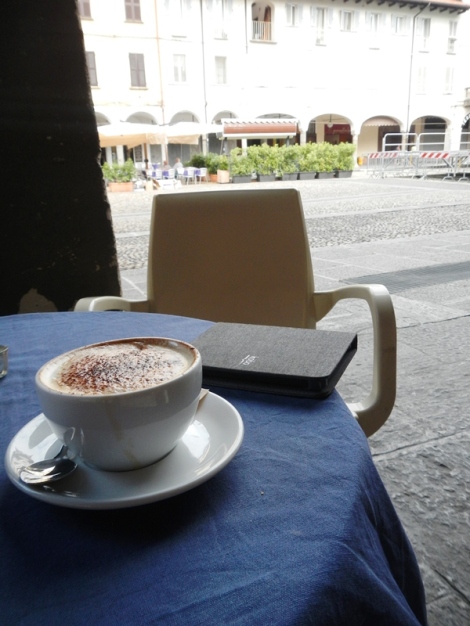