Despite our relatively short 40-mile day from Carros (through Nice and Monaco to Menton) not necessitating an early start, we were both wide awake by 6:45am. Rain had started to fall about half 6 and we’d both drifted back off but now it was more than rain. Now it was fast, heavy rain accompanied by lightning and thunder.

30 minutes passed with lightening every 2 to 3 seconds, deafening thunder and strong winds shaking our tent around enough that we began to get slightly worried for its and our wellbeing. On top of this, our pitch was now a few inches deep in water with the inner tent now floating around, resembling a water bed. Through all this though our trusty tent stood firm and didn’t leak.

Eventually, we heard the owner of the campsite calling us from outside the tent.  We unzipped the door and peered out to see him standing in full waterproofs holding an umbrella and motioning for us to escape to the safety of reception, which we did (barefoot) after getting soaked checking all the guide ropes and pegs were still in place.

We spent the next few hours hiding in reception watching the storm and listening to the radio as both the TV and internet had been taken out by the storm but by 9:30 it had completely cleared and made way for blue skies, at least in the direction we were heading. 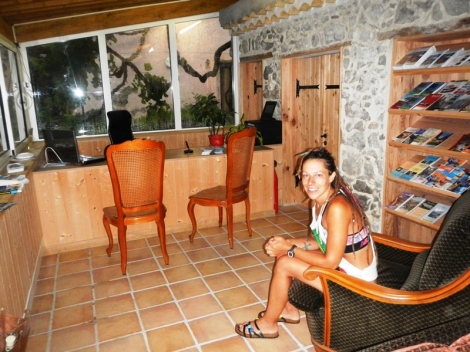 One quick but damp tent destruction later we were back on our way, south towards Nice. The roads were still very wet and after hearing a lorry locking its wheels on the approach to a roundabout we were on, we opted to take the longer but substantially quieter and relaxing cycle route to Nice.

The cycle route only took us about half way to Nice, after that we were relegated back to normal roads. Along them we were confronted with evidence of the storm which was now long gone: destroyed greenhouses, partially detached roofs and chimney stacks reduced to piles of bricks in the middle of the road. Later we heard that the winds reached over 90mph; our sturdy little tent did pretty well in all that!

Arriving on the sea front in Nice around 12 we sat for a little while in the sun, which by this point was pushing 35 degrees, watching the planes bank round and line up for landing at the airport, which was pretty much in the sea. 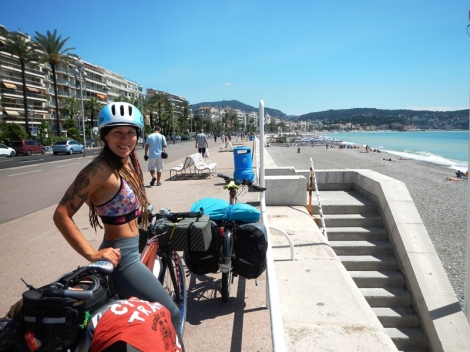 Nice seemed very, erm, nice but mega busy so we cracked on, skirting around the edge of the Mediterranean as close as we could. For a coastal town, it was pretty hilly with roads perched on sheer cliff faces. Somewhere between Nice and Monaco we stopped for a quick coffee and a cereal bar to regroup and change into some cooler shorts. 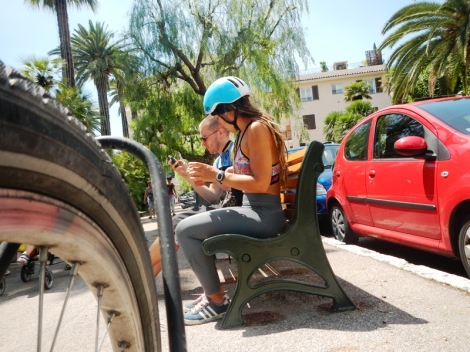 Continuing along the coastal road we started to see the cars passing us change from the usual French registered Renaults, Citroens and Dacias to much more expensive Monegasque registered Lamborghinis, Ferraris and Aston Martins, meaning we must be pretty close and before long we’d arrived at the harbour in Monaco, home to the most amount of yachts ever seen. 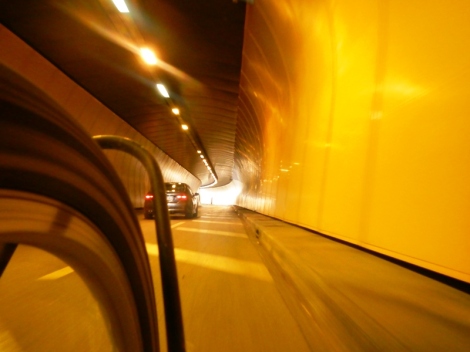 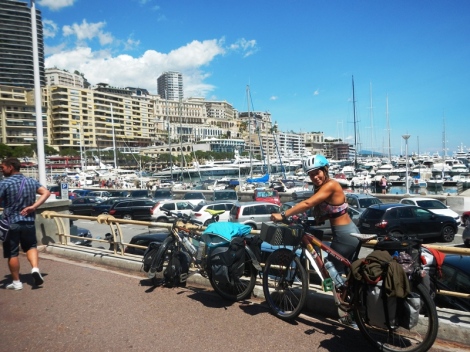 Our first impression of Monaco was that it was very hilly and insanely crowded with tourists- so many that we found it rather difficult to get anywhere with our fully laden donkey-bikes. We decided not to hang around and cracked on back into France to our campsite for the next 2 days in Menton which is, as far as I can see, the last town in France before everything goes Italian. As we entered Menton, with the GPS saying 1.5 miles to go, we were totally unprepared for the insanely steep climb up a hillside to our campsite.  After climbing nearly 600ft in less than a mile we arrived.

Given the locality to Monaco and Nice we thought it’d be a pricey deal but at only 15 euros a night for both of us, it was a welcome surprise. We spent the rest of the evening finding supplies in the town, eating burgers and stroking a cat with a dodgy foot.

After abandoning Monaco the day before, the next day we got the train back and spent a bit of time there sans bikes. Deciding not to wait for the train which was 40 minutes away, we got the bus instead and spent the next hour sat on a hot, sweaty bus in traffic. GREAT.

After disembarking our sweatbox, we ventured though the streets of expensive shops and casinos on our way back towards the main thoroughfare of the harbour. Scanning the windows of the exclusive and so-expensive-there-is-no-price-tag shops, we quickly concluded that money certainly does not entitle you to a sense of taste, with many items that wouldn’t look out of place in Halifax indoor market. 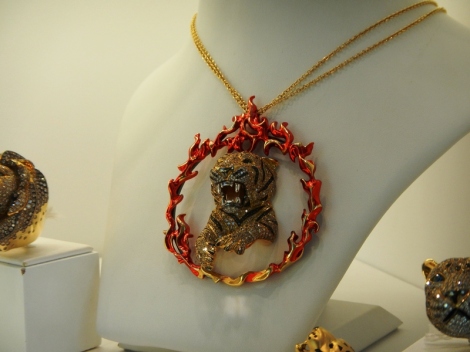 Many of the yachts weren’t exactly tasteful either (although you might argue when is a 70ft floating penis extension ever tasteful?), my favourite was one that had an entirely leopard print sofa on the back with the words “JUNGLE TIGER” (or something equally as shit) emblazoned across it. All the yachts were fully staffed too, so even if your multi-million pound arse can’t be bothered to travel to Monaco this year to use it you still have to pay for a team of people to keep the handrails polished and the windows clean. 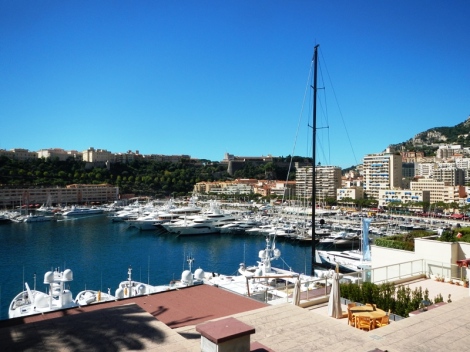 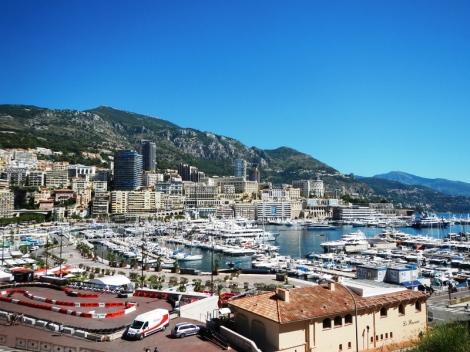 Even though this was a rest day, we spent most of our time climbing up very steep flights of stairs. The first such flight of never-ending steps took us to the Monaco palace.

It was pretty crap really, nowhere near as impressive as I’d imagined it would be and even had a little lego extension plonked on the end. Maybe someone found a million euros they didn’t know they had in an old coat and built a castle-come-extension with it?

We then explored the (also very touristy) bit opposite the palace where we were able to secure a Monaco sticker to adorn our bikes. 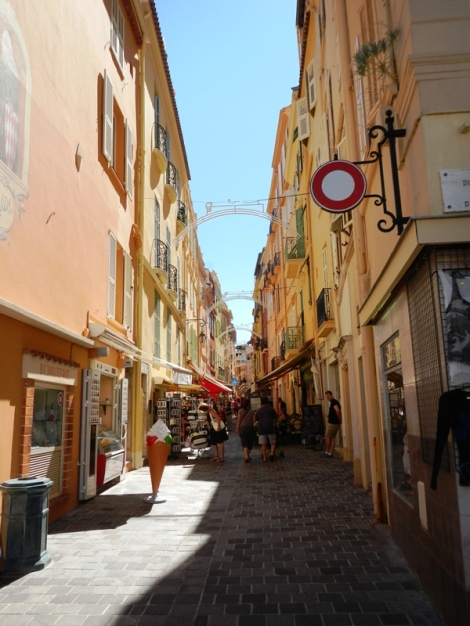 And next up was the Musee Oceanographique, which we didn’t visit as we’re tight and it was a bit expensive. Nice building though.

Which brings me to another thing about Monaco – generally, the buildings weren’t particularly impressive. It has been a principality for hundreds of years but the architecture was very 1970s and looking dated. Very clean and well looked after but a bit boring. 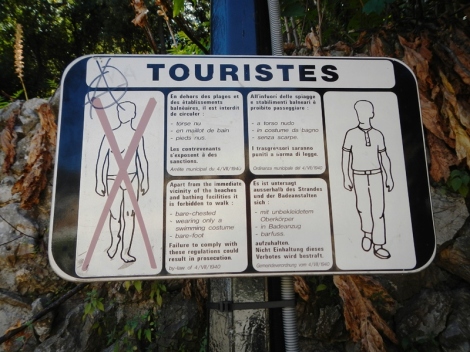 One last piece of Monaco excess: they had defibrillator on almost every street corner. What else do you buy the country that has everything?

After a picnic of bread, cheese and beer on a park bench by the harbour, we caught the train back to Menton where the only interesting thing we could find was a shop oddly called “Baby Seduction”. Probably something to do with the Catholic Church.

Wanting to get some rest after hiking up cliffs most of the day, we climbed back up to our campsite on the hill and rested ready for our 100+km mountain climb the next day into Italy.