On Monday morning we were rudely awakened at 6:30am to the sound of people banging around and generally being very noisy- there were loads of workmen milling around the abattoir working on the sets we’d explored the night before, however neither of us were sure exactly why they started so early. We packed up and headed off on our way, via Intermarche where we got our daily supplies and Neola finally found some (Hello Kitty) sunglasses that would stop flies going in her eyes every 4 seconds.

With the sky grey and weather cool it was another fairly relaxed day on the Canal de Garonne. But with the constant flat canal cycling and unchanging scenery, beautiful as it was, we were starting to get a little bored.  Until lunchtime, the only major occurrences were getting stuck behind a bin lorry that smelt of dead bodies and lots of speculation on why there were so many ramblers on the perfectly flat canal in full hiking gear complete with OS maps and titanium walking poles. There were no mountains or even hills within a 50 mile radius. Maybe it’s a scene thing we just don’t get. 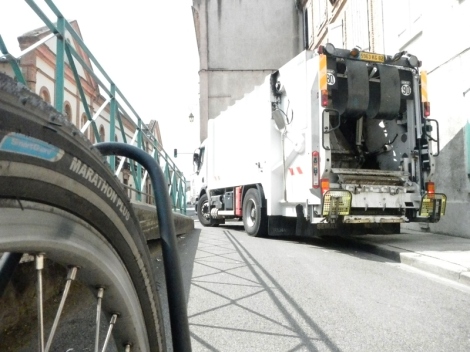 As the weather picked up we stopped and ate our lunch of pic’n’mix cheese and bread on a jetty by the canal. We were in a section with a big rise of 5 locks and here the canal split in 2: one way took the conventional approach of one lock after another to guide you to the next bit of water and the other was this bad boy: 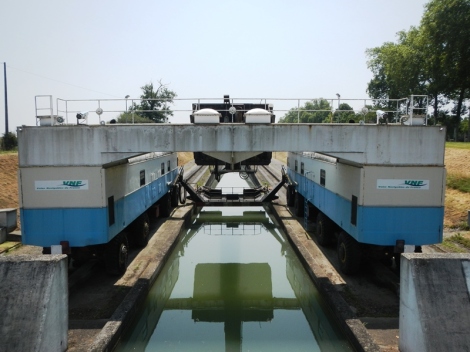 The Montech water slope. It ascends boats up in one go to the next bit of canal by moving the boat and all its water upwards. Whilst spectacular and a great bit of engineering, it did seem a little bit pointless. It also didn’t seem to have moved in quite a while given the amount of avian life living in and underneath it. I could be wrong though and I’d love to have seen it in action.

We cracked on again in the midday heat, going as quick as we could on the often very bumpy path to try keep some semblance of cool breeze going by.

By about 4pm we were approaching Toulouse, and the end of the Canal de Garonne. Here it would turn into the Canal du Midi which runs from Toulouse to the Mediterranean sea. As we approached we could clearly see we were heading for a city: lots of graffiti, big industrial estates and plenty of litter strewn about. At the end of the canal we were met with some useful signage.

And after consulting it we found which canal we needed and headed in that direction. Neola needed to check her emails for work as it had been a few days since we’d had internet plus we also needed something for tea so we took a little detour to McDonalds (for the free WiFi, not the Croque McDo this time) and to a shopping centre supermarket where I got escorted outside with our bikes and then approached by a man who looked suspiciously like he’d just stolen a block of cheese, smelled quite strongly of beer and started chatting to me about French cinema. 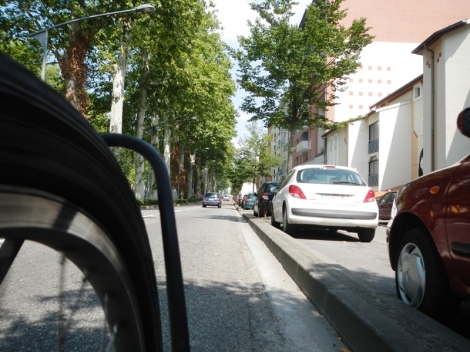 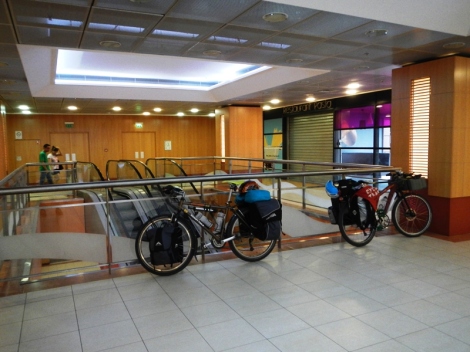 Escaped from the city drunks, fully stocked up and internet chores complete, we traversed Toulouse traffic once more to get back to the canal, after Neola got stuck in the middle of a road for several long minutes…

The canal though Toulouse was a busy thoroughfare of people on bikes, rollerblades or on foot either commuting or just out and about. The next most abundant thing we saw on the canal was tents, loads of them. And not just tents on their own, most had sofas, chairs, tables and even cupboards outside where people had clearly set-up home and had been living for some time. The biggest one we saw under a bridge consisted of a large tent, a sofa, coffee table and loads of kitchen cabinets.

It was quite a departure from the very clean and tidy Bordeaux to see homeless now lining the canal through Toulouse. Even when we ventured briefly into the city it was much of the same, looking and feeling very run down. You could call it a shithole, but that would just be mean.

The canal out of Toulouse quickly turned from urban jungle back into countryside, not before having the pleasure of cycling down a helter-skelter style bridge. 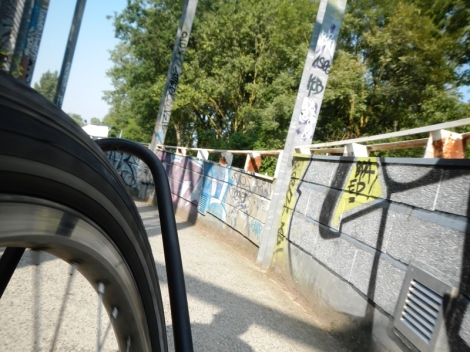 68 miles down that day, we threw in the towel in a town just outside Toulouse called Dayme and found our campsite for the night where we ate tea, played table football and watched the planes from the nearby airport take off and land which made Neola, the plane-o-phobe, very nervous. 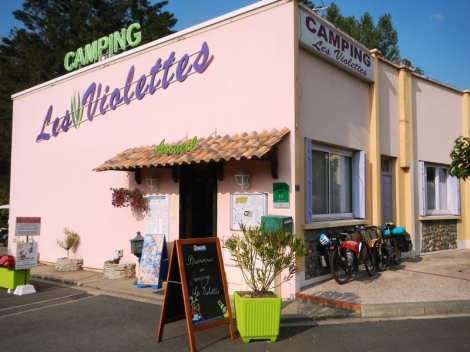