After a couple of relaxing and sunburnt days off, we packed up our bikes to set off on our way again on the Eurovelo 1/Velodyssey north towards our next major landmark of Bordeaux.
The day started well when our French tent neighbour saw our fully laden bikes and enquired about our trip so far, eventually asking us, in very broken English, what “world” we were from.  We assumed she meant “country”.  Hopefully she didn’t really think we were strange aliens from another planet, although it was pretty early in the morning.

With an early start and well rested, we had loads of energy, averaging 18mph for the first hour on the flat and overtaking slow-coaches left right and sometimes even centre.

It was a fairly uneventful morning of cycling after the initial rush-hour until we stopped for lunch at a little town just off the route at about 12. We went a bit overboard, buying bread from the boulangerie, cake from the patisserie, chicken curry from the rotisserie and fruit from the fruit stand. After being told we couldn’t eat our dinner on someone’s drive we’d accidentally sat down on, we ate like kings (royalty eat curry sandwiches and melon for dinner, don’t they?) and set off on our way again at a much more full-belly friendly pace.

As with the morning, the afternoon continued through more and more forests, interspersed with a bit of beach when the route veered close enough to the coast.

After another hour or so we reached the town of Mimizan-Plage where, as we’d experienced a few times previously, the signage for where we’d been going (Bicarosse) vanished as did the cycle route. We were joined in the confusion by a German family who were also trying to figure out which way to go but unlike us they were equipped with a map of Mimizan and the surrounding areas, complete with marked cycle ways. Between us we figured out where we needed to go and after saying danke got on our way once more.

By this time it was a scorching 38 degrees and having drunk all the water we had, a cold drink or a tap was needed. Luckily, we managed to stumble upon the French Acrobatic Convention at Peurnaout where there was a café and even a cold tap to restock our bottles whilst we watched the acrobats practice their stuff next to the lake.

In the next big town we found a beautifully air-conditioned supermarket where we hid inside from the heat and bought our evening meal. After the lunch of kings we went for a much more modest tea of tinned beans and sausages (shit) with pita breads (also shit). 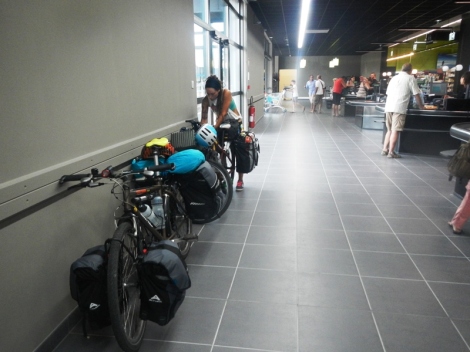 After our 61st mile, we were delighted to see a big sign by the side of the road for 2 star camping, the best we can aim for! Following the signs for a mile or so brought us to our reasonably priced overnight rest stop. The camp site was on the banks of a huge fresh water lake and after only a minutes walk we had our very own private beach where we ate our shit tea and had an after dinner swim. 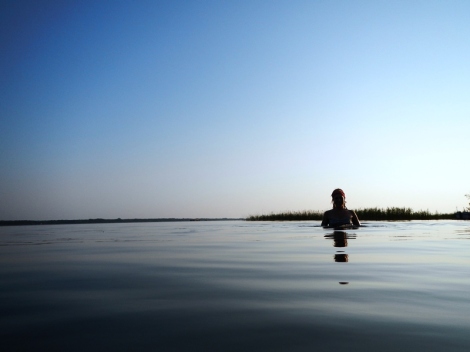 One response to “Veux-Bocau to Biscarrosse, continuing up the west coast”