After two days of cycling up mountains, we woke up a little achy, a little sunburnt and just a little bit chaffed.  With only a tiny and very sweaty banana each for breakfast, we were a little apprehensive about setting off to our next destination, Haro, 42 miles away.

It was about an hour or so into the day’s cycling when panic started to set in about where we might get our next meal from (yes, I do often panic where food is concerned).  We hadn’t passed any shops or signs of civilisation for quite a while, plus we were unsure of Sunday opening times.  Just when I was starting to get the lack-of-food grumps, we were saved by a tiny little village bakery.  I bought two bread rolls and all was well with the world again.  I realise this doesn’t sound like a particularly exciting event but I haven’t got to the best bit yet… When we chomped into the bread, it had a surprise chorizo sausage BAKED INTO THE BREAD.  I can’t speak for Nev but I personally could not have been happier at that moment in time. 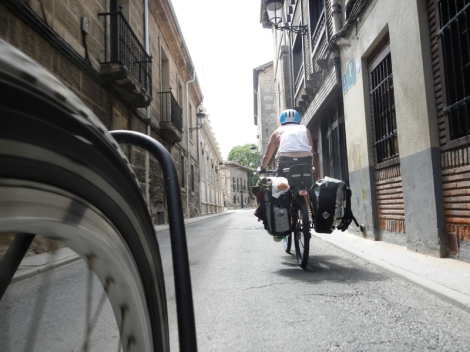 After the joy of the surprise sausage, the day just got better and better.  The roads through the valley bottom were long, reasonably flat and some of the prettiest I’ve ever seen.  We passed through so many quaint little villages setting up crazy looking bonfires for San Juan fiestas, but this was the most impressive attempt:

After marvelling over the strange yellow face and witch’s head for quite a while, we took the obligatory photo and continued on our way.

We passed through Espacio Nat De Los Montes Obarenes, who had the right idea when it came to the quandary of how to negotiate the mountainous landscape: instead of a winding road passing over the mountains, they just carved out tunnels right through the giant beasts, which made for some pretty scenic cycling. 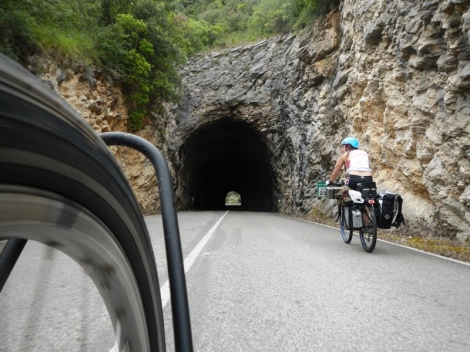 The sausage and the awesome cave tunnels weren’t the only things that day that made us both wowzer out loud.  Our earlier debate about why the river we were cycling next to for most of the day was moving so slowly was answered when we came across this pretty cool dam:

A bit further along the road, we had our first mechanical breakdown when my chain snapped.  Nev, as self-designated tech and tool manager, did some quick roadside repairs.

As soon as we passed the sign for Rioja, its status as a well-respected wine region became immediately clear as we began to cycle through mile after mile of lush vineyard.

Despite the many stops to repair bikes and gawp at dams and giant heads, we arrived in Haro at 1pm; our fastest day of cycling yet, covering 42 miles in just 4 hours.

We set up camp at Camping De Haro, which we have both agreed is the best campsite so far, for a number of reasons.  Firstly: 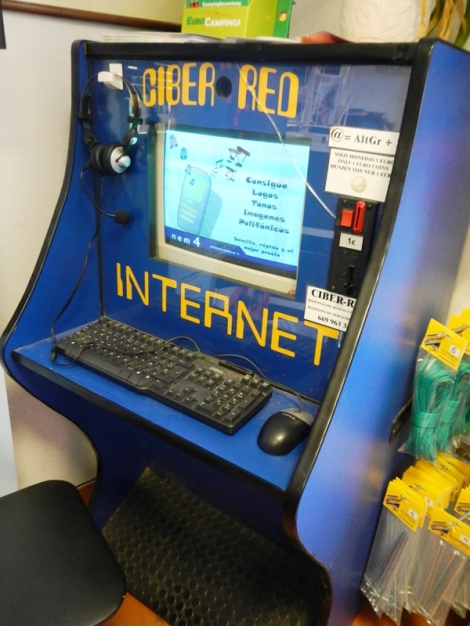 But not just that; the showers have temperature controls, a little shelf for your toiletries and a stool to sit on, there is an outdoor ping pong table, a kind man at reception, we have our own hedged plot with a tree and they sell bottles of Rioja (my fave wine) for EUR3.75.  Happy campers indeed!

We had a quick walk through the town and, oh boy, am I excited about sampling some of the many restaurants and tapas bars here!  As I write this, we’re just lazing in the sun in our cosy little plot drinking Rioja from plastic camping mugs.  Ahhh, this is the life… I think we’re going to enjoy Haro 🙂