It was 5:45 this morning when our alarm clock beeped to tell us to wake up. It was pointless though as we were already up and awake, and had been for longer than we should have. Much akin to a pair of kids on Christmas eve, it was somewhat hard to sleep the night before departure.

We had packed everything the night before so everything was sat by the door ready to be clipped onto our bikes in the morning. We had gone over and over what we might need, what we have, what we don’t have.  We had been very thorough, but still couldn’t shake that feeling we’d forgotten something as we handed over the keys to our neighbour for safe keeping. 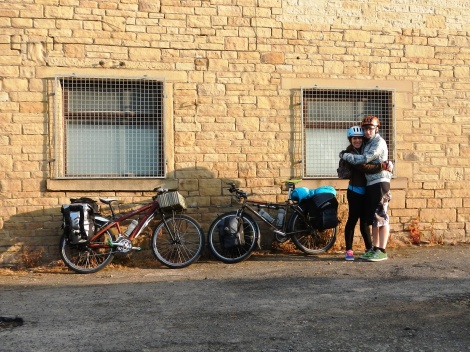 It doesn’t matter now, what we don’t have we don’t need.

Today has not involved much cycling; it has been more about trying to negotiate insanely busy train stations with bikes weighing as much as a small car. Not easy to say the least.

After a very comfortable (and most importantly cheap) train ride from Leeds to London, we set about figuring how to get from Kings Cross station to Waterloo station. Having never cycled in London (or, in fact, any big scary city) we were a bit apprehensive. We pushed our little packhorses away from the station in what we thought was the right direction to find the road we needed. Once away from the station we braved it and got out on to the open road.

What we thought would be scary, dangerous and frenetic was in fact only dangerous. It was actually really enjoyable cycling through the centre of London; the cycle lanes were well laid out, drivers gave us (just enough) room and when we encountered road works there were separate cycle diversions too. Brilliant. And on top of all this, it was totally FLAT, which as northerners is a luxury we’ve never had before.

When at Waterloo, we negotiated some more just-wide-enough lifts and sat on the main platform waiting to find out where our train was. Whilst we were admiring the weird and wonderful (mostly weird, actually, they were all pretty shit) hats on display courtesy of the Royal Ascot-goers, some charity bloke came and gave us some bananas for our travels.  He asked us about what we were doing and where we were going, which was pretty cool. I wonder if we’ll get bored of telling people where we’re going?

Once we were in Portsmouth (which is very much like Halifax but by the sea and a lot bigger), we found the ferry port (the signage is crap, although they do have a ‘Unicorn Road’, which is ace) and checked in. Whilst waiting for our ferry, we got chatting to a couple who were also on their way to Spain to do some cycling. They’d done this many times before and perhaps learning from their past endeavors, had no tent and much less strapped to their bikes than we did. I wonder how long it will be before we jettison that electric shaver and that big heavy jumper?

Now we’re on the boat, we’ve just spent half an hour or so chatting to another boat fweeend who struck up a conversation with us about our travels after seeing our fully laden bikes.  She lived in Spain (now lives in France) and gave us some interesting recommendations of places to visit.  She was lovely and so excited by the prospect of our trip.  She even said we could stop at her house for a glass of wine on our way through.  We haven’t even lost the UK signal on our phone and we’re already meeting interesting folk and sharing the story of our trip!

We’ve had our tea and are just drinking a glass of wine each, watching the ship leave the port. See you soon, England!

6 responses to “Day one, Halifax to Portsmouth”