Okay so I got this lovely 1991 Muddy Fox a couple of years ago after swapping it with a friend for an exhaust from my MR2. 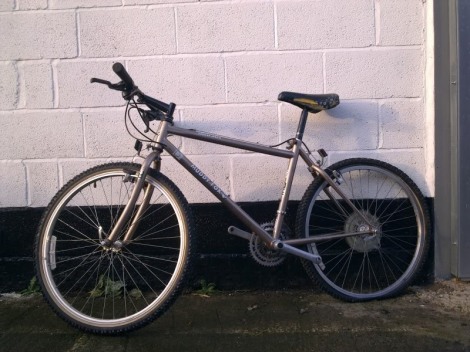 As you can see, it was looking a little sorry for itself. It’d been laid up in a shed for the last however many years, gathering dust and generally drying out. It had the original tyres and everything but they were very cracked so had to go.

This advert is actually from an earlier version of the Seeker, but they were quite a premium bike when new. Its a good cro-mo frame that’s made nicely. After stripping it apart and weighing, the frame comes in at a smidge over 3kg! Amazing for something that’s nearly as old as me! 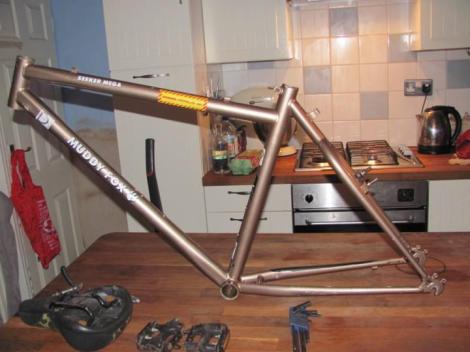 Anyway, mid 2011 I rebuilt it into my work commuter/offroad beast: 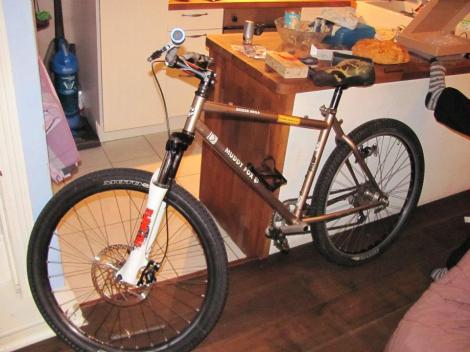 I ran it like this for a while as my commuter as I got ‘into’ cycling. It was great but after 6 months or so of riding like this, I figured I needed something more road focused without 100mm of travel as it was really, about 99mm more than i actually needed for the type of riding I was doing.

I then bought this, a later mid 90’s Muddy Fox Explorer Mega off ebay for £32. Bargain. 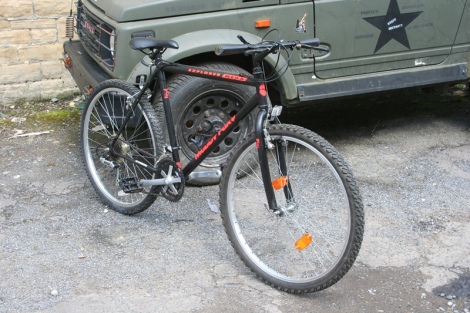 She was in pretty good shape really, clean and had been stored for the last 10 years or so. I put it mid to late 90s and is nowhere near as well made as my other Muddy Fox, with cheaper metal and cheaper parts in general.

A few parts were pretty tired, the crank arms were knackered as was the BB spindle, the brakes and levers were crap and front wheel a bit out of true but other than that she was fairly tidy. And after a few ebay purchases totaling another £30 quid, i had my new commuter which was much more suited. 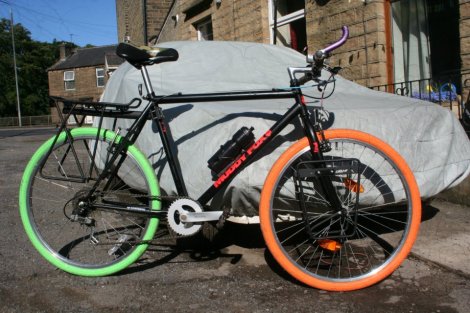 With a few parts pilfered from my Seeker Mega and bits i had knocking around, its been ferrying me several miles each day to work (and various other places too) with no complaints; not bad for a total of £62!

Anyway, back to my other ‘fox’. For 6 months or so, it’s been sat neglected in the cellar waiting some treatment, and a couple of weeks ago i got round to stripping it down and treating the odd scratch and bit of rust that had started to develop. After giving it a bath (in the bath) and a good rub down it was time for paint.

And after a coat of primer, some more gold. Unfortunately I am quite impatient and therefore complete rubbish at painting so there is a few runs here and there… but here is how it stands at the moment: 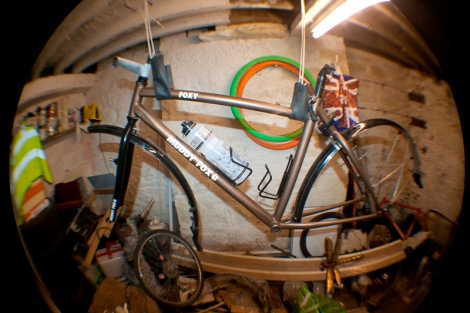 I went for Vauxhall Metallic Brown paint which, although not intended, is pretty close to the original colour it came in. I have also fitted a Richey Logic headset (£9), 2x bottle holders and bottles (£3.99 each), hard plastic mudguards in black (£17.99) and made my own bike stand using a couple of cable ties and an old inner tube.

So from here, i’ll be building her up as time and money allows until our departure in June. Stay tuned for updates.